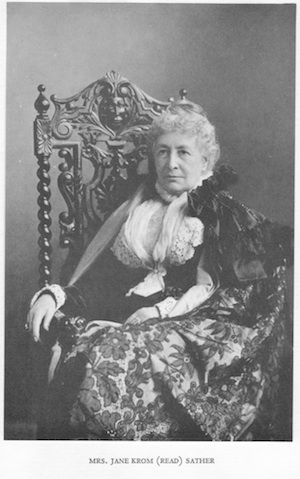 The late Berkeley Classics Professor Joseph Fontenrose wrote of the Sather tradition in his Classics at Berkeley. The First Century (1982):

It was [University President and Classicist Benjamin Ide] Wheeler who brought the Greek and Latin Departments their greatest boon. For it was he who induced Mrs Jane K. Sather to found the Sather Professorship of Classical Literature, which brings a distinguished classical scholar, American or European, to spend a term on the Berkeley campus. The first Sather Professor was John Linton Myres (Spring 1914), Regius Professor of Ancient History at Oxford University. In the period 1914-20, Paul Shorey, distinguished Hellenist and Platonist, came twice as Sather Professor from the University of Chicago, and E. K. Rand of Harvard, eminent Latinist and medievalist, came in 1919-20 for two terms. In these years the Sather Professor taught a full program of classes during his tenure; and in some years there were two appointed, one each semester (e.g., 1916-17, Paul Shorey and G. L. Laing). In 1919-20 Ivan Linforth and George Calhoun, thinking that something better could be made of the Sather Professorship, instigated a change in the duties of the chair, which was adopted. The Sather Professor would henceforth offer one course in his term and deliver a series of eight (later six) lectures on a topic of his choice, each set of lectures to be published as a book by the University of California Press with funds from the Sather Fund. The lectures and the book, it was announced, should be "of something more than ordinary scope and dignity." The new dispensation went into effect for 1920-21, and the first incumbent to deliver public lectures was John Adams Scott of Northwestern University in the spring term of 1921, who lectured on "The Unity of Homer," and the book was published in the same year. John Linton Myres came again in 1927, whose lectures resulted in the fat volume Who Were the Greeks?; and Paul Shorey came for the third time in 1928, giving us Platonism Ancient and Modern. Over the years many great scholars have occupied the chair, such men and women as Paul Shorey, M. P. Nilsson, Cyril Bailey, Lily Ross Taylor, Eric Dodds, Denys Page, Ronald Syme, H. D. F. Kitto, Bernard Knox, W. B. Stanford, G. S. Kirk, Hugh Lloyd-Jones. In the 1921-37 period, when there were two departments concerned, it was usual to alternate a Hellenist with a Latinist, varied occasionally with an ancient historian. There are now [1970] about fifty volumes of Sather Lectures published, valuable contributions to their fields, although, as one might expect, some are better than others, and not many attain the eminence of, -for example, Dodds's The Greeks and the Irrational, Shorey's Platonism, Nilsson's The Mycenaean Origin of Greek Mythology, Page's History and the Homeric Iliad , Kirk's Myth, Vermeule's The Greek View of Death.

Some Sather Professors have submitted a finished manuscript to the University Press while incumbents of the chair. Most want more time to work on their manuscripts and take anywhere from a few months to four years for this purpose. A few have taken more than four years (and there are some who will never submit a manuscript). For more information on the Sather Professorship the reader should consult Fifty Years of Sathers, written by Sterling Dow, the fifty-first Sather Professor.

Up to 1952 the Sather Professor had his own office in 470 Wheeler Hall, which was equipped with its own lavatory. From 1952 to 1996, the Sather Professor's office was 5210 Dwinelle Hall, which held a library of all volumes in the Sather Lecture series and other books useful to the incumbent of the chair, and its walls were hung with a gallery of photographic portraits of past Sather Professors. Since 1997 the office has been in 7210 Dwinelle. The portrait gallery is now limited to the four or five most recent imcumbents, while the historical photos have been preserved in two large albums, and are now also seen here on a virtual wall. In keeping with the times, not only is there a fine collection of basic texts and reference books there, but the Sather Professor also has the most up-to-date computer equipment.

Since the date of Fontenrose’s work, the Sather series has continued to thrive. For information about the Sather Lectures published by the University of California Press, go to the UC Press site.